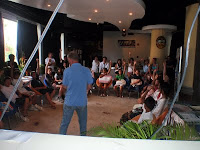 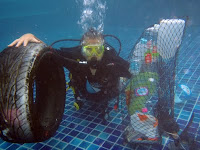 Samui Mala Blue Day 2009
Staff from Divers in Paradise, The Dive Academy and Planet Scuba hosted children from Bluewaterer School as part of the Samui Mala 2009. The children listened to presentations on Oceans in Trouble, which addressed the problems caused by trash in the Ocean, and Protect the Sharks, which looked at the role Sharks play in the underwater world and how they are in danger due to overfishing and shark finning.
The children then took to the pool where they were introduced to diving and were shown examples of the kind of trash that we regularly see underwater.
The boys and girls from Bluewater were a pleasure to meet and hopefully they learned something new and enjoyed what we had to show them.
One special comment from one of the children at the end of the afternoon after watching Sharkwater, the film showing exactly what happens to sharks to satisfy the Shark finning trade: "We've got to do something about this!!" - let's hope they do.
Great job guys to all those that made the event a success.
Posted by Unknown at 6:11 AM