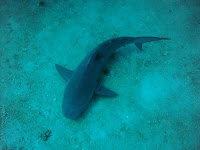 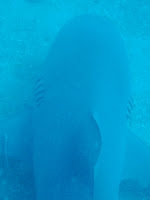 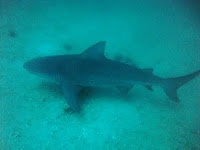 Having been away for all of this year, it's great to see that the sharks are now back at Chumporn Pinnacle.
We don't know where they have been but general opinion is that the sharks are now alot bigger than they were before, particularly one very large bad boy Bull Shark at around 3 metres long!!
Previously at Chumporn Pinnacle most of the reef sharks would be 1.5 - 2 metres, with the occasional one a little bit bigger. When we dived there recently it seemed that even the smaller of the sharks were around 2 metres.
Let's hope they stay around for a while!!