A Manta in Lanta

We are holidaying in Koh Lanta at the moment and today we went out on our first day of diving on the trip. As we have for the past 5 years we were diving with Blue Planet and were happy when Laurent said we were going to the main dive sites in this area - Hin Muang and Hin Daeng, but weren't too pleased when he said it was a 6.45am meet - meaning getting up at 5.45 to walk the dogs. Not even they were to happy to be walking at that time - they are on holiday after all as well!!
The boat left at 7am and most people had a sleep on the way. We got to Hin Maung first after the 4 hour boat journey - it's a long way and not by speedboat!! Viz was only about 7-10 metres, but with lots of fish and the possibility of a Manta that was enough. It was just nice to be diving somewhere different and to see different fish to usual. The first dive was good but pretty uneventful with the rumour of somebody seeing a Manta but nothing confirmed.
Then after a quick hour on the surface we dropped down at Hin Daeng, with a message from another boat saying there were two Mantas around. Again viz was only about 7-10 metres, but again with lots of fish and lots of colour the viz was enough. After swimming around for about 10-15 minutes and frantically looking for the Manta's, I caught a very quick glimpse of a big dark object swimming away. Knowing there was a Manta around we stayed put for a couple of minutes before seeing a 4 metre Manta swimming quickly below us at about 30 metres. I managed to get a quick shot but not a brilliant one. Knowing the Manta's were in this area most of the dive groups stayed around, and watching one group start swimming and pointing at the same time I guessed they had seen one. And sure enough there was a big Manta Ray about 6 metres tip to tip, just disappearing over a ridge. We managed to get within a couple of metres of it before it turned and quickly disappeared. Again I managed to get a few photos but none that are likely to win any awards!! But to be honest I'm not too bothered about the photos, seeing Manta Ray's again made it worth while getting out of bed while it was still dark!! 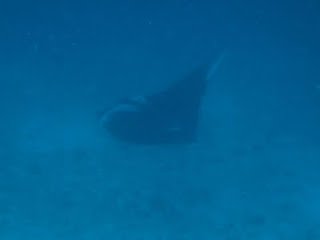 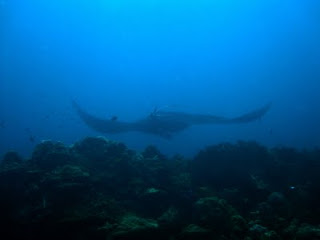 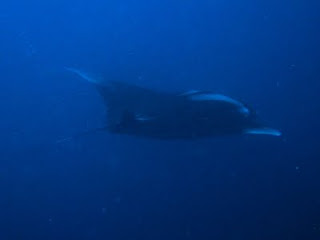 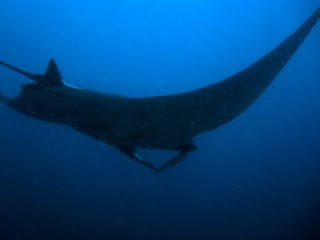 And it wasn't only Manta Rays we saw, there were lots of other things too. For our little friends Sam and Fin, who rightly pointed out that we couldn't have seen Nemo because he is in Austrailia, here are pictures of the Thai copies of Nemo and Dorie that we took, and two big Moray Eels which for some reason reminded us of the two old men from the Muppet Show. And a load of Emperor Angel Fish, Oriental Sweetlips the occasional Lion Fish and lots more... 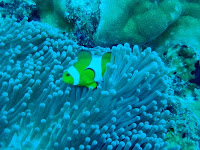 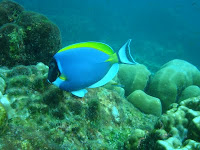 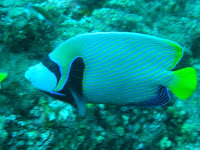 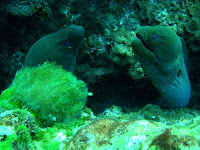 Posted by Unknown at 7:34 AM No comments: