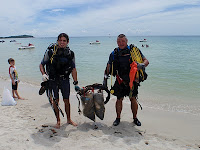 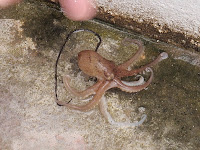 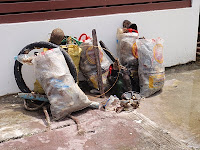 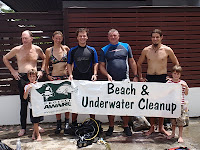 The day before they begin their IDC with The Dive Academy, the candidates joined Course Director Camille and me for an underwater clean-up from Chaweng Beach.

As expected there were many plastic drinks bottles, plastic floats from boats, sunglasses, diving masks, shoes and many other things, mainly made of plastic. All together we pulled out 6 bags of rubbish, as well as some bigger items that wouldn't fit in the bags. There is so much rubbish there that we could probably spend all day bringing bags out and still not clear it all.

As well as clearing the rubbish we still managed to see some fantastic marine life, including 2 amazing colourful nudibranch's that I haven't seen before, jelly fish and lots of starfish. The biggest surprise of the day was when a small brown Octopus jumped out of one of the rubbish bags onto the floor, obviously hiding in one of the bottles or other rubbish we removed!! We quickly put it in a plastic cup and returned it safe back into the sea.

Thanks Marlies, Tobias and Joep and good luck with the IDC.
Posted by Unknown at 8:46 AM No comments: 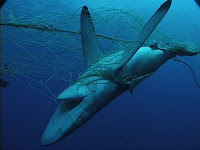 Due to negative media coverage over a number of years and sensationalised Hollywood movies such as Jaws, sharks have wrongly been given a reputation as man-eating monsters. The average number of shark attacks worldwide is only around 50 per year, with around 5 being fatal. More people are injured and killed every year by elephants, bees and farm animals – but when did you last read a newspaper article about somebody dying from a bee sting?

There are over 400 different shark species in our oceans and only a few (the bull shark, great white, and tiger shark) can be potentially dangerous. The likelihood of being attacked by a shark is less than being hit by lightening.

Sharks are at the top of the food chain in the oceans. They play a very important role in maintaining the balance in the oceans by preying on sick and weak animals. By eating the weak or diseased animals they help keep the fish population healthy. They also help keep the population sizes of other fish species in check, helping maintain the balance of the underwater ecosystem that has survived successfully for millions of years.

As one of the oldest species on Earth, Sharks have survived in the oceans for over 400 million years. But today, like many other animals in our world, sharks are in danger with over 100 million sharks being killed around the world each year. During the past 15 years, some shark species populations have been depleted by up to 80%. Unlike many other fish, sharks grow slowly and have very few offspring, which makes them particularly vulnerable to extinction.

The main threat to Sharks comes from Overfishing, Shark Finning and as a result of accidental By-Catch.

Sharks are fished in large numbers so their body parts can be used in a number of ways. There is a massive demand for sharks teeth for use as souvenirs, cartilage and liver oil for use in Chinese medicine, and for sharks fins for use in restaurants.
Overfishing of sharks also causes problems on the reefs. When shark numbers are decreased, the fish that they feed on, such as grouper, increase in number, which mean the fish that they feed on, like parrotfishes, are reduced in number. The removal of reef grazers, such as parrotfishes, then causes reefs and coral to suffer as there are not enough grazers to remove the algae that helps keep the reefs healthy.

Every year tens of millions of sharks die because of Shark finning. Shark Finning is the practice of catching sharks then cutting off the shark's fins and throwing the remainder of the shark back into the sea, while it is its still alive. The abandoned sharks either starve to death, are eaten alive by other fish, or drown because they cannot move and cannot extract oxygen from the water that they need to survive.
Shark fins are collected to feed the growing demand for shark fin soup, which is a delicacy particularly in Hong Kong and China. Millions of Sharks are brutally slaughtered just so people can enjoy their fins mixed in a soup.

Bycatch is when animals such as Sharks are caught by accident in fishing gear that is intended to catch other species. Bycatch is usually thrown back dead or injured. Turtles, whales, dolphins and sharks are all victims of bycatch.

Every little bit of help and support Sharks get is a step towards solving the problem. The first step towards achieving change is through educating yourself and others about sharks, their conservation status and the importance of their survival in the ocean.

Consumers can also help by avoiding eating or using shark products, such as shark cartilage pills, shark meat, shark liver oil, and shark fin soup. Try and encourage other people to do the same, and if you see a restaurant serving shark fins on their menu leave the restaurant and tell them why, and maybe our children’s children will benefit from the advantages of still having a healthy population of sharks in our oceans.
Posted by Unknown at 11:33 PM No comments: