An amazing day at Sail Rock

Left hand on the weightbelt, right hand on the mask and regulator, look below to make sure nobody is there - "bloody hell there's a Whale Shark". Just as I was about to execute my role model Giant Stride entry a Whale Shark swam up to the back of the boat, on the surface, and nearly brushed against the boat ladder.

A minute or two of mayhem then ensued with everybody on the boat getting their gear on and conducting the fastest possible Buddy Checks (always safety first!!) to get in the water with the Shark in case it swam off. Fortunately it stayed around long enough for everybody on our boat to see it before it swam away.

After a few minutes of chaos we descended and swam away from the main rock and across to the Secret Pinnacle where again the young female Whale Shark come right up to us to have a look. With nobody around except me and Sarah the Whale Shark just hung around and kept swimming right up to us - Sarah had to close her eyes and duck at one point because the Shark came so close to bumping into her. I have been lucky enough to see many Whale Sharks in the 9 1/2 years diving out here and have been very close to them - one Whale Shark actually bumped into me many years ago - but I've never had the experience of a Whale Shark deliberately swimming up to us so often and so close - at one stage my face was about 30cm from hers. And many times she swam up to us then went above us so our bubbles went on her belly - she must have liked that because she did it quite a few times!!

We just drifted around with the Whale Shark for about 30minutes and thanks to the slight current ended up away from both the rock and the Secret Pinnacle, and to be honest I didn't have a clue where we were - and didn't really care. Fortunately the Whale Shark swam back towards the Pinnacle and we regained our bearings.

Towards the end of our dive the Whale Shark swam underneath the 3 dive boats which had just arrived from Koh Phangnan and started swimming towards them as as it did when we arrived. It actually went so close that I had to pop my head out of the water to warn the guys jumping off the boat that she was there or they might have accidentally jumped on her. They seemed happy to know she was there - I heard one Instructor later telling her DSD how lucky he was to see a Whale Shark on his first ever dive - no kidding!!

On the second dive we actually swam around the rock to keep away from the Whale Shark as by this time she was surrounded by lots of other divers. There was so much great stuff to see such as giant baracuda's, schools of Batfish, Trevally and Fusiliers, as well as lots of small stuff such as moray eels, shrimps and pipefish.

At the end of the dive, just as we were completing our safety stop underneath the boat the Whale Shark come in and again came right up to us and swam around for a minute or two before swimming off. Just came to say goodbye I'd like to think!!

Yesterday was probably my most amazing encounter with a Whale Shark and I feel very lucky to have been where I was when I was and I am grateful that the Whale Shark was comfortable enough to stay around as long as she did. I am happy to say that I didn't see or hear of any divers doing anything stupid like grabbing the Whale Shark or anything else that would have made her uncomfortable and made her swim away which would have spoiled a very special day. 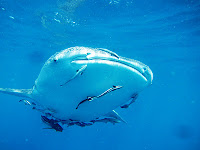 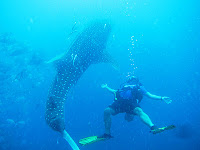 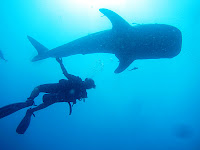 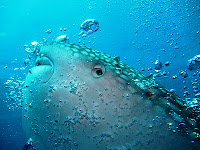 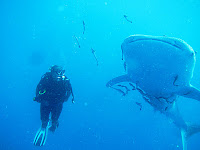 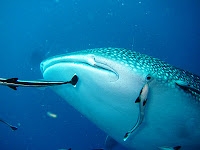 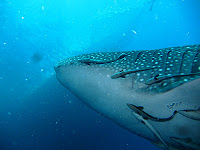 Posted by Unknown at 8:50 PM No comments:

Another Successful IDC and IE

The Dive Academy want to congratulate another 5 IDC Candidates who sucessfully completed the 2 day PADI IE and are now PADI Instructors.
Chris, Callan and Jose completed the 9 day IDC with Course Director Camille and IDC Staff Instructors Paul, Imad, and Christophe and our Japanese Candidates Miwa and Hideki were assisted through the 9 days by Staff Instructors Nobu. Aiko and Ami.
In between finishing the IDC and beginning the IE Chris, Callan and Jose also completed their EFR Instructor Certification, which consisted of manhandling and badly treating Little Annie and even Baby Annie.
Once again we are very happy for all the guys for passing the IE and wish them all the best for the future as PADI Instructors. 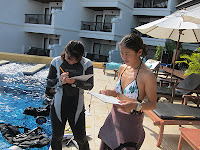 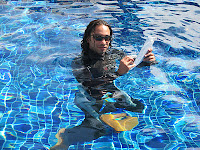 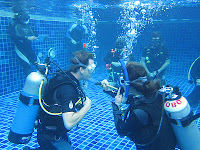 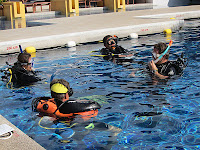 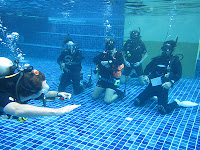 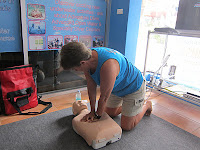 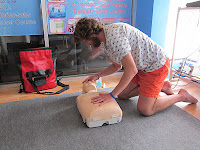 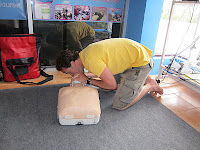 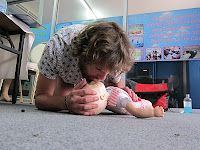 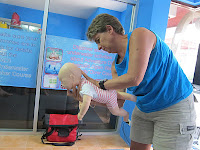 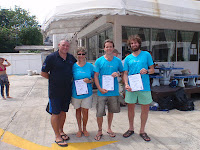 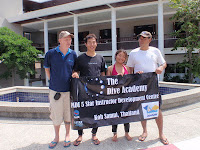 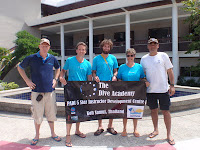 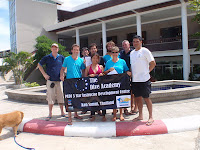 Posted by Unknown at 3:19 AM No comments: